Located in the south of Namibia between the Namib and Kalahari Deserts, the Fish River Canyon is the largest canyon in Africa and forms part of the Ai-Ais/Richtersveld Transfrontier Park. Considered to be one of the most visited attractions in Namibia, this majestic Canyon features spectacular views of an immense ravine that is 160km (100mi) long, 27km wide and over 550m deep. In previous years, the canyon was sculpted by the mighty Fish River which now exists as a stream towards the bottom of the canyon.

The Fish River is the longest interior river in Namibia flowing from the eastern section of the Naukluft Mountains towards the Hardap Dam near Mariental. It stretches out over 800km but does not constantly carry water throughout the year. During the dry winter season (May- October) the River is reduced to a chain of narrow pools that supply water to wildlife in the surrounding area. The River does however flood during the wet summer months (November- April) cutting deep into Namibia’s arid and stony plateau. Views of this phenomenon are best seen from the top of the Kooigoedhoogte Pass where impressive scenes of the Four Finger rock pinnacles are also on show.

One of the main reasons visitors flock to the Canyon every year is to embark on a magical 5 day hike along the Fish River Hiking Trail. The scenic 85km route begins at Hikers View Point near the Hobas Rest Camp and follows the course of a dried-up riverbed, passing a series of fleeting pools while finally ending at the hot-spring resort of Ais-Ais. Due to the heat and flash-flooding so prevalent during Namibia’s summer season, the trail is only open from April to September offering groups of three to 30 people direct access to the heart of the Canyon- an exclusive experience inaccessible to day visitors.

The Canyon acts as a habitat to a number of smaller mammals including baboons, dassies (rock hyrax) and rock-hopping klipspringer. Those who visit the canyon may also be lucky enough to spot kudu, mountain zebra and leopard whilst hiking the Fish River Trail or enjoying a shorter stroll along the rim of the Canyon during sunset. The prolific birdlife is another reason why the Canyon is such a popular tourist destination. From wagtails and pelicans to black eagles, fish eagles and herons there are over 60 species that can be spotted within this magnificent area alone. 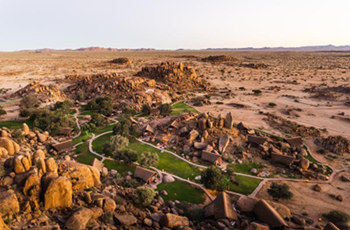 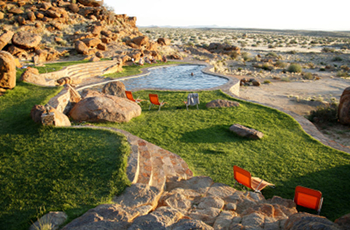 The best time to visit the Canyon is during the dry season as skies are clear and temperatures range between 20°C/68°F and 25°C/77°F. The pleasant temperatures and dry conditions are perfect for hiking and game-spotting as animals congregate around the smaller pools of the Fish River, in order to stay hydrated. Because this is an area of summer rainfall the climate during the summer months is hot and humid. Daytime temperatures sit around 30- 40°C (104°F) with as much as 60- 70% of the area’s rain falling during this time of year. Accommodation options around the Fish River region differ according to price, amenities and personal preferences. From charming guest houses and bed and breakfasts to luxury lodges and remote campsites, there is something to fit everybody’s needs.

On this 16 Day Self Drive Tour, you get to explore most of Namibia's central, northern and some of the south
Read more