Tanzania is home to 7 World Heritage Sites and a whopping 38% of the country is devoted to the preservation of nature. If this conjures up an image of a beautiful country well worth a visit, then you are spot on! Our tours and safaris below this intro offer a selection of Tanzanian…

Tanzania is home to 7 World Heritage Sites and a whopping 38% of the country is devoted to the preservation of nature. If this conjures up an image of a beautiful country well worth a visit, then you are spot on! Our tours and safaris below this intro offer a selection of Tanzanian highlights or we can tailor-make a Tanzania safari for you while you brush up on your Swahili greetings!

Safari favourites in Tanzania’s north include Serengeti National Park, Ngorongoro Crater, Mount Kilimanjaro and Tarangire National Park all accessed via Arusha. The Serengeti is famous for the Great Migration, an annual journey of 2 million wildebeest, zebra and various antelope that circulates around the Serengeti and Kenya’s Maasai Mara. Closely monitored by a throng of lion, leopard, hyaena and cheetah, this phenomenal spectacle is determined by rainfall and grazing which varies from year to year. 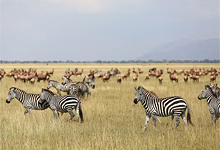 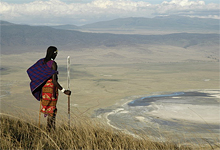 Ngorongoro Crater, the world’s largest inactive volcanic caldera, also offers superb big 5 game viewing providing sanctuary to around 25,000 animals. Nearby Olduvai Gorge is renowned for archaeological discoveries of the earliest known human remains and the Ngorongoro area offers opportunities to interact with local Maasai tribes.
Further east, the sight of Mount Kilimanjaro will take your breath away. If you are fit and healthy, the 5896m/19,343ft ascent to Kili’s summit is a serious undertaking but achievable without ropes or technical climbing experience. 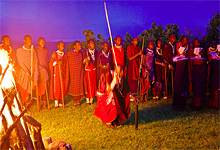 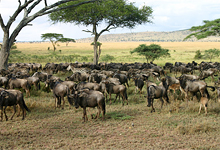 Southern Tanzania is dominated by Selous Game Reserve, a less congested safari alternative to Tanzania’s popular northern parks. And what better way to round off a safari than a spell on the picture-perfect beaches of Zanzibar.

In Tanzania’s Manyara region, Tarangire National Park has it all, from acacia woodlands and aquatic forests, to fields of elephant grass and giant baobabs, the park is known for large herds of elephant and a mini-migration.

Ngorongoro Crater is one of the world’s largest intact and unbroken volcanic calderas, around 610m deep and 260km² is home to wildlife including cheetah, elephant, hyena, and buffalo.

Located between the glistening waters of Lake Manyara and the Great Rift Valley, the Lake Manyara National Park is a protected area between Tanzania’s Arusha and Manyara regions

As the world’s tallest free standing mountain, Mount Kilimanjaro is also the highest peak in Africa, and as such classified as one of the ‘7 summits’

Possibly the most iconic game reserve in Africa, the grasslands of the Serengeti is where a large part of the great wildebeest migration takes place

One of Tanzania’s untouched gems, Ruaha is home to 10% of the world’s lion population, huge herds of elephant and antelope, cheetah as well as the third largest population of wild dog in the world.

The Nyerere National Park spans 30893km² and covers a large swathe of what used to be the northern part of the Selous Game Reserve.