The Namib-Naukluft National Park is nestled in the southwestern corner of Namibia and is one of the largest conservation areas in Africa. Within the Park lies Namibia’s most popular salt and clay pan, the Sossusvlei. Intercepted by some of the highest sand dunes in the world, the Afrikaans name “Sossusvlei” is directly translated to “dead-end marsh”. This refers to the area where the dunes meet and prevent the mighty Tsaucab River from flowing a further 60km into the Atlantic Ocean forcing it to spread out over the pans during the wet season. Despite the extreme desert-like conditions of the Sossusvlei, the wildlife in this section of Namibia is thriving as plants and animals have adapted well to living in such a harsh environment.

• The Sesriem Canyon: Shaped by the fast-flowing water of the Tsaucab River, the Sesriem Canyon is located about 5km from the Namib-Naukluft National Park gate and is one of the few places in this arid region that holds water throughout the year.

• Sand Dunes: With heights ranging from 170m to 325m, the Sossusvlei dunes are great for climbing as they are renowned for their vibrant orange/red colours and striking views. A few notable dunes include Dune 45, Big Daddy and Elim.

• Hidden Vlei: This is the third most famous, yet least visited vlei in the Sossusvlei region due to its secluded location at the end of a 2x4 trail. Here, visitors get to stroll across the marshland and enjoy a moment of solitude in the peaceful desert surroundings that make up the Hidden Vlei.

• Deadvlei: This is an area of striking disparities characterised by its white clay pan, dusty red sand dunes and black, lifeless trees creating a picturesque backdrop for those journeying through the Deadvlei region.

The Sossusvlei receives less than 50mm (1.9 in) of rain per year due to the dry conditions of the surrounding Namib Desert. The most optimal time to visit is during autumn (March-May) or spring (August- October) as the crystal clear skies and mild temperatures associated with these seasons, are ideal for great game-viewing experiences. The dry winter months (June-August) are often accompanied dehydrated pans as the water in the Tsaucab River begins to decrease, as well as the dreaded east wind that brings in cool air from the Atlantic Ocean. The wind usually arises during the height of winter, therefore travelling at the beginning or end of winter when days are still warm, is highly recommended. The wet summer months (November- February) get uncomfortably hot as temperatures range between 30°C/95°F and 40°C/104°F, however after some good rains the Tsauchab begins to flow again creating a lush oasis of shimmering lakes around the dunes.

Many plant and animal species have adapted well to the harsh environment of the Namib. By utilising the fog which emerges off of the Atlantic Ocean or extracting moisture from the sand during the dry season, animals such as springbok, gemsbok, brown and spotted hyena, Cape fox and jackal are able to survive in the Sossusvlie. Nara melons, welwitschia and camel thorn trees are a few plants that are spread out across the desert and extract water from the air for optimum survival. Sunset or sundowner safaris, scenic helicopter flights, hot air balloon trips and quad biking excursions are some of the best ways to experience the regions breath-taking scenery and wildlife. 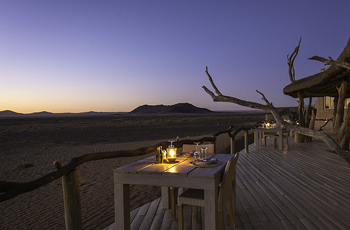 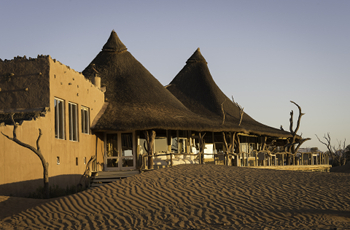 There is a wide selection of accommodation options around Sossusvlei that vary according to budget and traveller preferences. From luxurious desert retreats and lodges to incredible campsites and self-catering units, there is something to suit everybody. Most of the accommodation options on offer are within 1 hour drive from the Namib-Naukluft Park providing ample opportunity to enter the park at sunrise and witness the dunes during the magical morning light.

On this 16 Day Self Drive Tour, you get to explore most of Namibia's central, northern and some of the south
Read more