A land of striking disparities, Botswana is one of Africa’s renowned safari destinations that lies at about 1000 meters (3280 feet) above sea level. With its semi-arid sub-tropical climate, Botswana is well known for its mildly dry winter season which runs from May to October, and it’s wet and humid summer season which runs from November to April, making it a charming destination to visit year-round.

Average Rainfall and Temperatures in Botswana
During Botswana’s Dry Season, skies are clear, humidity is low and the average daytime temperature is around 25°C (77°F). Between June and August, mornings and evenings tend to get chilly as temperatures sometimes reach freezing point. September is a perfect month to embark on a Botswana Safari as the air is mild, vegetation sparse, water in The Delta is in abundance-attracting large concentrations of animals to the area, and the arid soil is excellent for walking safaris and game-drives.

Botswana’s wet season consists of high humidity and temperatures that range between 20-35°C (68-90°F). During this season, the lush, green vegetation begins to bloom following the increased summer rainfall, inviting many beautiful migratory birds to the country. The rain occurs in mighty afternoon thunderstorms. The north-east receives about 600 millilitres (23 inches) annually, and the drier, south west receives about 200 millilitres (8 inches). Given the heat in the wet season it is a less popular time of year to visit and many safari camps offer reduced rates during this time- another great reason to visit Botswana in the summertime! 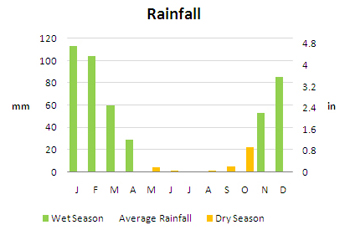 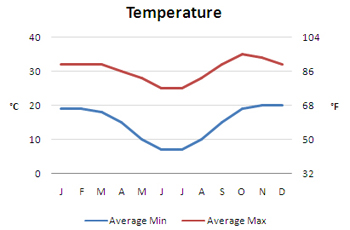 The best time to visit Botswana is influenced of course by weather, and by which of the country’s diverse landscapes you are visiting. These include flat, wide-open salt pans, rivers, rocky outcrops, wetlands and semi desert, all with an abundance of wildlife and potential spectacles …

The Okavango Delta is web of permanent lagoons & channels that flood annually during Botswana’s Dry Season, as a result of the previous summer rainfall in the neighbouring Angolan Highlands. This rain produces a swell of water that travels 1200km down the Okavango River over the course of a month, dispersing itself into the alluvial delta of Botswana, instead of making its way into the sea. A visit between June and August is the best time of the year, as the 15000km² delta is home to an abundance of bird and wildlife including great herds of elephant, buffalo and hungry predators who trek for days to reach this marshy paradise. The dry season is perfect for gliding your way across the calm waters of The Delta by a boating or mokoro. From April to November, tiger fishing is at its best, whilst the rains that fall between November and April, turn the Delta into a bird-watching oasis, making it an attractive destination to visit year-round.

The Chobe National Park is Botswana’s first National Park that is named after the turbulent river which flows through it. The Park is situated close to Kasane, Livingstone and the Victoria Falls and is known for its ecological diversity, as well as having the largest elephant population in the world. During the dry, winter months the north-eastern section of the Chobe River lures a number of Africa’s largest mammals to the area, making it one of Botswana’s top safari attractions.

Linyanti and Savuti are two unique regions within the Chobe National Park that encapsulate the true essence of Botswana’s biodiversity. Linyanti in the north-western section of the park, captures the magnificent seasonal Zebra migration that occurs just after the summer rains, whilst the marshy area of Savuti in the western section of the park, are best for game-viewing during the dry season, as multiple predators are easily spotted feasting on the local antelope in the area.

The Makgadikgadi Pans located in the north-eastern section of Botswana is a thriving, year-round destination. During the Wet Season, the flooded salt pans attract thousands of the elegant pink flamingo, herds of Zebra and the bat-eared fox. The dry salt and clay-like crust that covers the pans during the Dry Season makes quad-biking excursions and sleep outs on the pans a unique experience

Situated in Central Botswana, The Central Kalahari Reserve is the second largest reserve in the word dominated by golden grasses, outstanding wildlife such as giraffe, cheetah and wild dog, and a number of fossilised river valleys. The best time to visit is just after the Wet Season with the flourishing vegetation, rich fauna and little new-borns that begin to drop with the rains.