Cape Town pulsates with a potent energy that bedazzles even the most seasoned of travellers…in fact some international visitors never leave! The city has a string of accolades to its name including being ranked the top holiday destination in the world by The Guardian British newspaper and The New York Times in 2014.

Cape Town is the second largest city in South Africa after Johannesburg but with its exquisite natural beauty and hospitable warmth, the atmosphere feels much more intimate and relaxed than that of a sizeable metropolis. It is no surprise then that the provincial capital of the Western Cape is one of the most popular African cities to appear on the itineraries of holiday makers and business travellers from around the globe. Many choose to stay in the heart of the action on the V&A Waterfront where world class shopping, entertainment and restaurants are at your fingertips.

Although the best time to visit Cape Town varies, Cape Town never ceases to amaze visitors. Whether you are in Cape Town on your annual vacation, for a conference, on a romantic honeymoon, with the family or travelling solo, this sparkling South African jewel welcomes all with open arms and promises excitement and adventure. Time spent in the Mother city combines perfectly with a Kruger safari, luxury train travel in South Africa, a trip to Victoria Falls, or a beachside sojourn on the tropical east coast of South Africa.

History buffs will find Cape Town’s colourful story intriguing! In the late 1400’s and 1500’s, European ships ploughed their way around the Cape of Good Hope to trade with the East, guided by the welcoming sight of Table Mountain. Interest in establishing a settlement came later in the mid 1600’s when the Dutch East India Company (VOC) employed Jan van Riebeeck to ‘set up shop’ on the shores of Table Bay to grow produce and trade with local tribes for livestock to supply its vast fleet of 6000 ships en route between The Netherlands and the East. The settlement flourished around Table Bay and, well, the rest is history! The Company’s Garden in the CBD is the original site of the fresh produce garden established in 1652 and, today, it is a popular visitor attraction and a resource to teach urban agriculture skills. An interesting way to gain further insight into the historical highlights of Cape Town as well as the turbulent years of Apartheid is by visiting the Castle of Good Hope, the Iziko South African Museum, the Slave Lodge, the District Six Museum and the Robben Island Museum.

Cape Town’s cultural heritage is diverse and is composed of Dutch, French and British which added to the native population of Khoisan from the 1600’s. Slaves brought from Madagascar, Java, Indonesia and India contributed to the foundation of the Cape Coloured and Cape Malay ethnic groups. Abolition of the slave trade in the 1830’s resulted in their freedom and the Bo-Kaap muslim community was established at the foot of Signal Hill, now famous for its unique, flamboyant residential architecture and traditional Cape Malay cuisine. The Bo-Kaap and neighbouring De Waterkant are firm favourites with tourists.

Visitors arriving to Cape Town, particularly by air, are blown away by its breathtaking natural features which provide an exciting outdoor playground for residents and travellers alike. Table Mountain’s striking form dominates the landscape and lies within Table Mountain National Park which extends 60km down the peninsula to the sheer, rocky cliffs of Cape Point. At the base of Table Mountain, the stunning Kirstenbosch National Botanical Garden is justifiably world-renowned and a great place to view a wide variety of the Cape Floristic Regions unique fynbos species. On a clear day, the panoramic views from the top of Table Mountain are magnificent and a great way to get a feel for Cape Town’s layout. Chapman’s Peak Drive offers a spectacular scenic journey along the Atlantic coastline and on the eastern side of the peninsula, False Bay is an ideal spot for whale watching and shark cage diving. Visit the Boulders Beach colony of endangered African penguins near Simon’s Town, equally good for a lazy day on the beach, or discover the golden sandy shores of Camps Bay, Llandudno or the Clifton beaches. 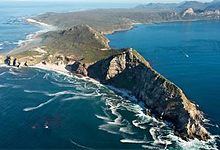 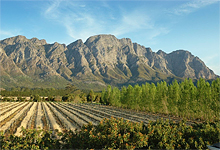 The Cape Winelands are an integral part of the history and culture of Cape Town and a visit to this delightfully scenic region is essential! It would be fascinating to know if Simon van der Stel, the first Governor of the Cape Colony, had envisioned the phenomenal success of South Africa’s winemaking industry he played a pivotal role in establishing way back in 1679. Although Cape Town’s first vineyard was set up by Jan van Riebeeck to supply wine to the VOC’s fleet of ships, the wine was unimpressive. Van der Stel dedicated much effort in improving wine quality and after founding the town of Stellenbosch in 1679, he employed the valuable winemaking skills of Huguenot refugees from France to help kickstart the industry. He also established the beautiful Groot Constantia wine estate in 1685 and his son later developed Vergelegen Estate. Today, van der Stel is considered the father of the Cape’s wine industry. Tours of the Cape Winelands to sample award winning wines, bubbly, brandy and craft beers and to experience the picturesque ornately gabled Cape Dutch manors are highlights of virtually every Cape Town itinerary.

The sensational city of Cape Town has been sweeping people off their feet for centuries! So, browse African Travel Gateway’s South Africa Tours & Safaris to discover the best ways to incorporate a visit to Cape Town into your African holiday itinerary.