Victoria Falls, the legendary waterfall on the Zambezi River at the border of Zambia and Zimbabwe, is one of the most monumental natural formations in the world! It is not until you stand before this gargantuan sheet of thundering water amidst the swirling mist with the ground quivering beneath your feet that you truly appreciate the sheer magnitude and beauty of the unique Victoria Falls.

One of Africa’s great icons and one of the Seven Natural Wonders of the World, Victoria Falls is centrally located within 100km/62mi of the four corners of Zimbabwe, Zambia, Botswana and Namibia and is well worth adding to your Southern Africa safari itinerary.

From a geological perspective, the formation of Victoria Falls is fascinating. As the Upper Zambezi River courses eastward through Zambia it flows over the Central African Plateau, a flat basalt tableland marbled with large sandstone-filled clefts. Over many thousands of years, the immense power of the surging river eroded the weaker clefts and eventually formed a gorge. Over the course of time, the river has fallen at a number of different locations which can now be seen as a series of sharply zigzagging gorges downstream from Victoria Falls. The enormous scale of this formation is best viewed from the air and a helicopter flight, hot air balloon ride or microlight flip will provide a breathtaking bird’s-eye view of the falls, some of the gorges, the Zambezi River and the adjacent rainforest areas where game is often spotted. 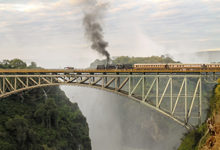 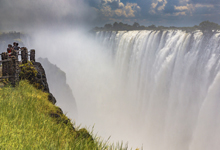 Designated as the largest waterfall in the world, Victoria Falls is a massive 1708m/5604ft wide and 108m/354ft high making it the only waterfall in the world over one kilometre wide and over 100 metres deep. At the verge of the flat basalt plateau, the full width of the Zambezi plunges in a single vertical drop into the main gorge. The volume of water varies depending on the time of the year and is generally at its highest during the Zambezi’s annual flood season between February and May. At its lowest flow during November, the river is divided into a series of channels and descends in a number of separate falls. At peak flow in April, the massive plume of spray generated by the falls is buffeted skyward for at least 400m/1312ft - occasionally even double this figure - and can be seen and heard from over 40km/25mi away! On a full moon evening, you may even be lucky enough to observe a ‘moonbow’ or lunar rainbow, created when moonlight refracts off the water droplets in the plume. Victoria Falls is one of the few places in the world where you can witness this rarely seen phenomenon and the colours, usually less intense than a sunlight rainbow, are best captured with long exposure photography. Victoria Falls National Park offers lunar rainbow tours each month on the day before, the day of and the day after a full moon although the moonbow is usually best seen between April and July when the falls are flowing most vigorously.

Archaeological sites in the area around Victoria Falls have uncovered some interesting artefacts. Stone weapons, adornments and digging tools have been discovered, some of which are thought to date back as far as 3 million years. Following the Stone Age, the Khoisan hunter-gatherers inhabited the area who were displaced in due course by various tribal groups, the most recent of which named the falls Mosi-Oa-Tunya, ‘the smoke that thunders’. Today, the waterfall continues to be revered as a sacred site among local tribes. In the mid-1800’s, Scottish explorer David Livingstone became the first Westerner to make a transcontinental journey across Africa - an extraordinary feat! On his determined quest to open up the interior of the African continent to Christianity, commerce and civilisation, Livingstone witnessed a spectacular waterfall on the Zambezi which he patriotically named ‘Victoria Falls’ after the British monarch at the time, Queen Victoria.

Tourism began to flourish with the construction of the Victoria Falls Bridge in 1905, driven by Cecil Rhodes’ vision of a Cape-to-Cairo railway. The town of Victoria Falls on the Southern Rhodesian (now Zimbabwe) side of the falls became the main tourist hub and the grand Victoria Falls Hotel was opened to accommodate visitors arriving on the new railway. Today, Victoria Falls Hotel is still as pretty as a picture and has been accompanied by various other accommodations as well as hotels, bars, tasty restaurants and cafes, supermarkets, and Victoria Falls Airport is about 20km out of town. A range of arts and crafts are available from street vendors to boutique style shops and galleries. The town of Vic Falls, as it is locally known, also hosts annual events such as the Victoria Falls Marathon and the Vic Falls Carnival, a three day music festival leading up to New Year. The town is small and easily walkable although do keep your eyes peeled, particularly at night, for elephants and other wildlife wandering the streets - a regular feature of life in Vic Falls! The Best Time to Visit Victoria Falls really depends on the activities you wish to experience. 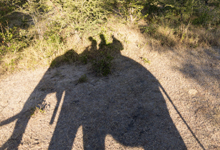 The town of Livingstone, the tourist epicentre on the Zambian side of Victoria Falls, combines genteel colonial character with authentic African ambiance. Livingstone has really surged ahead on the tourism front in the last decade offering similar services and facilities to its Zimbabwean counterpart and Harry Mwanga Nkumbula Airport, formerly Livingstone Airport, is about 15km from town. The elegant Royal Livingstone Hotel is nestled right beside the Zambezi River which offers its guests an amazing excursion on the Royal Livingstone Express steam train. The four hour tour passes through the Victoria Falls World Heritage Site where elephant and other wildlife can often be spotted followed by a 20-30 minute pause in the middle of the Victoria Falls Bridge where guests can marvel at the sunset, alight and explore the bridge, and enjoy a sundowners drink before a sumptuous five course dinner is served on board. Midstream of the Zambezi denotes the border between Zambia and Zimbabwe and national parks exist on either side of the falls:

Mosi-Oa-Tunya in Zambia incorporates Victoria Falls and extends downstream from the falls along the Batoka Gorges and upstream for about 20km/12mi. The park’s 66sqkm/25sqmi area offers a circular self-drive route, much of it alongside the river, or visitors may prefer to join a guided game drive or guided walk. With few predators in the park, the animals are quite relaxed providing some superb photographic opportunities. Birders will appreciate an impressive array of birdlife and the rare Taita Falcon is one of 35 species of raptors that breed in the falls section of the park. A number of walking paths lead to various viewpoints of the falls but be sure to wrap your technological goodies in a plastic bag to protect them from the drenching spray. Take the path upstream - with great care – to see the Zambezi as it approaches the rim of the falls. The walk across the narrow footbridge to ‘Knife’s Edge’ will reward you with a mind-blowing view of the Eastern Cataract which flows most powerfully in late summer. The walk to the ‘Boiling Pot’ whirlpool is more strenuous, descending down a steep path into the Batoka Gorge to the banks of the Zambezi.

Victoria Falls National Park in Zimbabwe extends along the river for several kilometres above and below the falls. In the area opposite the Main Falls a beautiful rainforest-like ecosystem thrives sustained by the continuous source of water provided by the falls’ spray. The rainforest is essentially an extension of the natural river bank or riverine fringe and supports a huge diversity of plant species, birds and small mammals. Visitors can explore the rainforest on various pathways leading you to the Livingstone Statue and a number of scenic viewpoints of Devil’s Cataract and Main Falls. The constant mists also sustain a similar ecosystem on the cliff face opposite the falls which is thick with mahogany, date palm, fig and other species of vegetation.
Zambezi National Park, also on the Zimbabwe side of the falls, is located on the Zambezi River upstream from Victoria Falls. At 567sqkm/218sqmi, it is much larger than Victoria Falls National Park with excellent game viewing opportunities. Keep an eye out for elephant, lion, buffalo, leopard and hippo as well as herds of sable and eland antelope. Keen birders will appreciate the presence of the near-threatened African Skimmer which spends July to November on the sand banks of the Zambezi to breed. The park has two main game viewing sections. The Zambezi River Game Drive is accessed via the main gate and offers an extensive network of roads along the river. In the southern area of the park, the entrance to Chamabondo Game Drive is about 5km/3.1mi from the town of Victoria Falls. Game usually concentrates along the river during the dry season and disperses as soon as the summer rains begin around November or December. 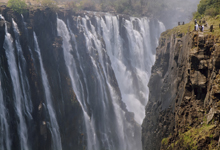 The Victoria Falls area offers a tantalising menu of adrenaline-surging activities to satisfy the most wild-spirited of visitors including bungee jumping and gorge swinging, white water rafting or jet boating on the Zambezi rapids, and abseiling down the gorge’s sheer rock face. More sedate pursuits are also available such as the vibrant Livingstone Craft Market, canoeing or sunset cruises on the Upper Zambezi, elephant or horseback safaris, tours of the Victoria Falls Bridge, and high tea on Stanley’s Terrace at Victoria Falls Hotel. Or head to The Bridge Café and sample a Bungee Burger and a Zambezi Lager while spectating the bungee jumpers as they launch themselves off the bridge! The Livingstone Island and Devil’s Pool Tour is also a sensational way to experience Victoria Falls, but be sure to choose a reputable and licensed operator. Between early July to early March when the river is low enough, a short but exhilarating boat ride departing from the Royal Livingstone Hotel speeds through the currents of the Zambezi to the sand and rock Livingstone island located mid-river, sidled up to the edge of Victoria Falls. After gazing in awe at the jaw-dropping view of Horseshoe and Rainbow Falls, those feeling brave enough can jump into Devil’s Pool accompanied by a qualified guide. This is possible between late August and December when the water level is very low. Eroded over thousands of years, Devil’s Pool is a deep natural ‘infinity’ pool contained by a rock ledge right at the lip of the falls where the water is only a few centimetres deep and the current is very low. Assisted by the guide, one can lie on this rock ledge in relatively still water and peer directly down the throat of the 108m/354ft gorge with the Zambezi raging on either side – a heart-pounding experience you will never forget and, for the romantics at heart, a breathtakingly sublime location to wow your loved one and ‘pop the question’!